Etsy releases statistics for those who are selling on Etsy in their monthly Weather Report. But a Weather Report for a single month doesn't tell you much until you put it in context with previous months.

So, you can call me crazy, but I decided to spend a week pouring over Etsy sales stats from January 2008 to September 2012 to see what trends I could find.

By the time I was finished, I ended up with bleary eyes, and a few interesting insights into the general direction of sales on www.etsy.com.

All of the numbers I'm going to mention came from the Weather Reports that you can find on the Etsy News Blog.

I went back as far as January 2008 and put all of the monthly data into an Excel spreadsheet to make the numbers easier to compare and analyse (So you'll understand why I might be in need of a big glass of wine right about now!).

An Overview of Etsy Sales Over Time

I started with an overview of Etsy sales by month and year just to get a grasp of the general patterns.

I earn a commission for purchases made through links on this page.
To learn more, please see my disclosure.

So the chart show that Etsy has grown quite substantially over the last three and half years, but it also shows some predictable monthly patterns and seasonal rises and dips in sales.

Most notably, every November, sales start to really skyrocket, and they continue to rise through December. Not surprisingly, sales drop off in January and February, and there's a little dip in June also.

One thing that's interesting is that, although sales dip in January, Etsy is growing so much, that by March and April, their total monthly sales figures are back to approximately the levels of the previous holiday season highs.

Unfortunately, it's unclear how that return to top sales figures by early spring will translate into sales for the average Etsy shop.

However, looking at this chart with the numbers Etsy does provide, you can get a good idea of how you might expect your own Etsy shop sales to fluctuate throughout a typical year. 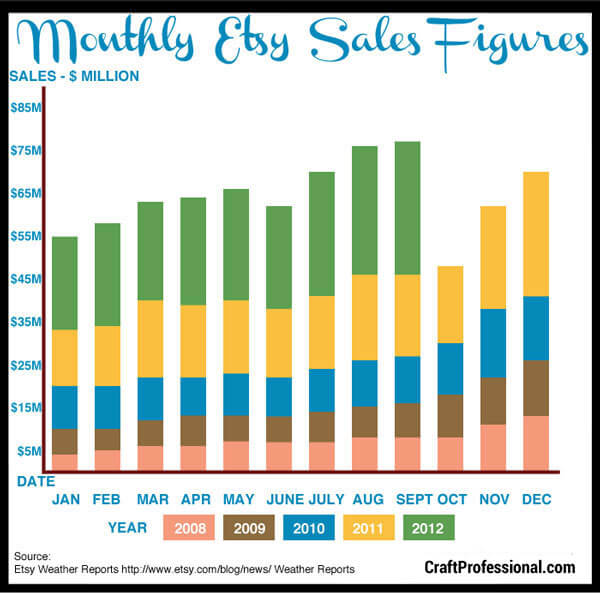 A Hidden Opportunity for Selling on Etsy?

You'll find a chart comparing these two factors for 2011 below. This relationship holds true through other years; I was just too bleary-eyed to chart for all three years.

Unless I'm missing something, this chart indicates a nice sales opportunity in November and December on Etsy because you have more buyers looking to buy and fewer listed items competing with the items you are selling in your own shop.

What that tells me is, if you are selling on Etsy, it would be wise to really push through the full holiday season, not just November, and be posting new items right through December.

If you look at the article Best Selling Christmas Crafts, you'll see statistics for times when people shop over the holidays, and they mirror the Etsy statistics. That is, people generally start holiday shopping in November but they shop right through December, and that includes online sales.

So if you're going to make the most of sales over the holiday season, it's wise to keep pushing your items on Etsy right through into December. 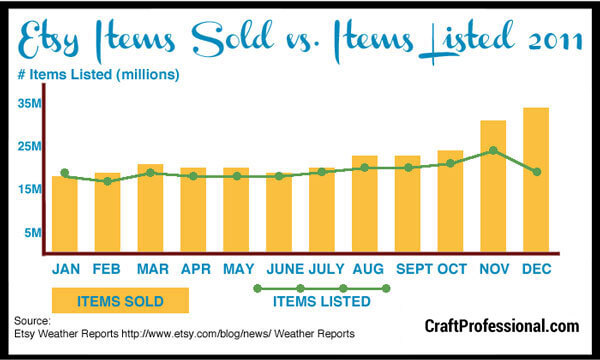 The final chart tracks the changes over time in the average selling price for items that are sold on Etsy.

Keeping the price of handmade items at a profitable level is always an issue, and selling on Etsy is no exception.

From the chart below, you can see the average price of items sold on Etsy around September 2012 is $21.

Now that may seem like a low average price for handmade items. However, it's difficult to comment accurately simply because Etsy doesn't provide details about the types of items sold.

So, in general, we can see the prices are steadily going in the right direction on Etsy.

And, keep in mind, just because $20 is the average selling price doesn't mean that has to be your selling price. 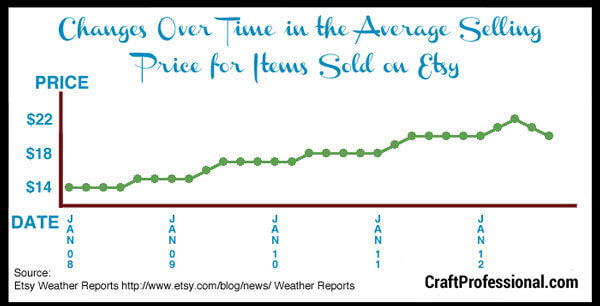 That's all my brain can take of Etsy stats! If you want to learn more about Etsy, check out the guide to Selling on Etsy!

Discover the Etsy affiliate program and learn how it can boost your online sales. 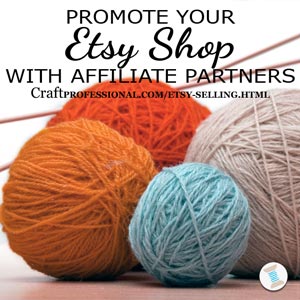 Learn how to build relationships with Etsy affiliates to promote your shop. 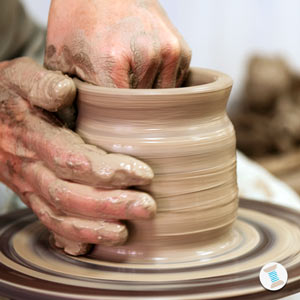 Check out Handmade at Amazon. Is it the right venue for your online craft business?